The Serious Risks of NOT Shredding

Millions of dollars, and your reputation.

Believe it or not, nondigital theft happens more often than you think.

We hear a lot about the “paperless” office these days, and enormous online data breaches often dominate the news. Businesses still rely heavily on paper, however, and experts say that old-fashioned paper thieves are quietly making off with valuable corporate secrets and the personal identities of millions of unsuspecting Americans.

Earlier this year, researchers at University of Texas at Austin discovered that half of all identity theft incidents between 2006 and 2016 involved criminals who exploited “nondigital vulnerabilities”, including sensitive paper documents. Businesses are affected, too: Offline corporate spying costs companies as much as $1.1 trillion every year, far more than the $400 billion lost to cyber-related espionage.

Companies that fail to shred paper face millions in fines

One of the biggest risks of not shredding is the enormous fines. When it comes to protecting consumer privacy, companies and institutions are legally bound to maintain the highest standards, and governments have not been shy about handing out multi-million dollar fines for those who don’t take that responsibility seriously.

In a 2009 case, pharmacy employees were caught disposing of health records in an unsecured public dumpster, and the federal government slapped the company with a $2.25 million fine under the Health Insurance Portability and Accountability Act (HIPAA). The risks of not shredding are even higher today. More recently, in 2015, a large supermarket paid nearly $10 million in fines after California prosecutors discovered pharmacy records with private medical information tossed in public dumpsters with bags of hazardous waste.

Customers won’t buy from businesses that lose their personal information

In addition to huge fines, businesses that fail to protect their customers’ information must pay the incalculable cost of a damaged reputation. Studies show more than 86% of consumers won’t do business with a company that suffered a security breach involving credit or debit card details, home addresses, telephone numbers and even email addresses.

3 steps to avoid the risks of not shredding

A well-designed document destruction program is the best way to mitigate the risks of not shredding. Not only will a shredding program help you guard customers’ privacy, avoid fines and protect your reputation, it will also reduce the cost of storing unnecessary or outdated records.

Understand your responsibilities under federal and state laws. Work with your lawyer and accountant to identify records that require special handling.

Start by developing a basic records management program and establish a record retention schedule. Then train your employees to implement the plan.

Join forces with a trusted, professional shredding partner who can provide secure shredding bins, schedule regular pick-ups and provide a certificate of destruction upon completion.

There’s no question that the risks of not shredding get bigger every year. Protect your customers, your business and yourself – start a shredding program today.

Then, get Corodata's 5-step checklist delivered to your inbox. Learn step-by-step how to integrate your "Shred Everything" policy into your company's operations and culture. 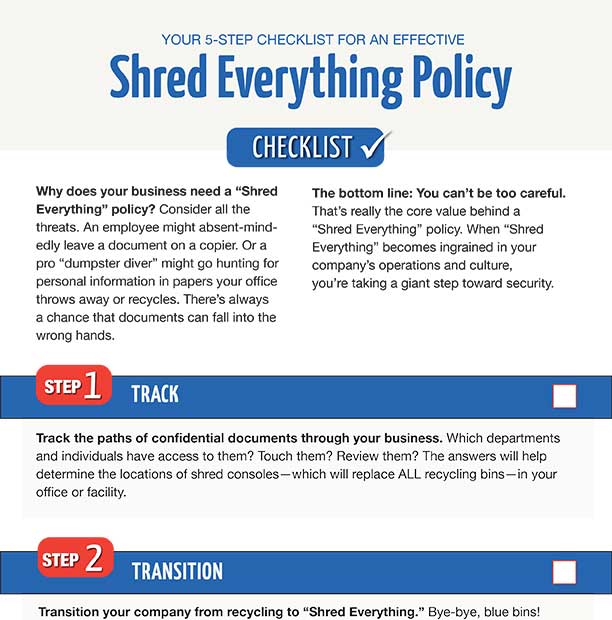